Lyme survivor says, "It feels like every day is a gift"

A woman from Grunthal believes she is alive and thriving today because of the support she received from family and friends after waiting over a year before getting diagnosed and finally getting the help she needed.

Bailey Plett’s life was going really well back in September 2019. She had just graduated from college. She’d just enjoyed the summer working at the radio station as Summer Events Host and had just started working as a pharmacy assistant at Sobey’s in Steinbach when, Plett says, “things started to get a bit crazy.”

A couple of weeks into her new job she suddenly started developing stomach cramps. Plett says they were “the worst stomachaches you could ever think of, and I didn't know what to do. Like I kept throwing up and nothing was working. I took Tylenol. I took everything you could think of to help with the stomachache, but it just was not going away.”

Plett felt there must be something wrong, that she had to go see a doctor.

“So, I took lots of tests, lots of blood work. I went and saw many, many doctors and it was only until I think the fall of 2021, when I actually found out that I had Lyme’s.”

Plett says she has no idea where it came from, “because we live in Southeast Manitoba and there's literally ticks everywhere. So, you never know if the tick you have is the one that's going to make you sick. And for all I know, I had it 11 years ago or it was from a couple of months before, but it was undiscovered until I had gotten all of these different symptoms.”

Plett says there were times during her illness when she was so weak that she could barely get off the couch. She couldn’t eat anything without being in pain.

“Oh yeah, it was really tough.”

She says it wasn’t just her body that was tired. “You’re also mentally tired. It's exhausting when doctors don't know how to help you and you're like, "but there's something wrong with me."

“Thankfully, I had a really great family doctor who always kept fighting for me when I couldn't fight for myself, and my parents did that for me too. They've been a real rock for me during this whole crazy thing.”

Plett says, she had to quit her job, because she just kept asking for time off. She remembers a day when she said to herself, “I can't do this anymore. There we were, at a point where my dad had to carry me to bed because I was so weak."

"By October 2021 we had seen so many doctors but they all didn't know what to do. So, we decided to take a leap of faith and go to the Mayo Clinic in Rochester Minnesota.”

The trip to the Mayo clinic would cost a fair bit of money and so family and friends organized a fundraiser for Plett. “And thanks to many generous people we were able to raise exactly the amount of money that we needed to get there.”

Plett continues, “And we knew we were in the right place when in my first appointment, after we got there, the doctor was able to tell me exactly what was going on with me, without me even saying anything."

"It felt like a real miracle. Not only to get the money that we needed to get there but also to know that this doctor knew how to help me. So yeah, it was crazy and it was terrifying and exciting all at once.”

Plett says because Lyme Disease had been stirring in her body for such a long time and left untreated, the doctors ended up diagnosing her with 5 other medical conditions. She says “it kind of created havoc in my body.”

She describes one of the conditions as PoTS (Postural tachycardia syndrome).  “A heart condition that essentially, you don't have enough blood volume going through your body, so it only goes to your heart and brain, which is to keep you alive, but it doesn't help you in any other way. So that's why I was so weak and that I couldn't digest food properly because my body was just trying to keep me alive at that point. So that was one of them, along with Chronic Fatigue and Fibromyalgia.“

Plett continues and says, “The list is long, but then it was all kind of linked to something called ‘Central Sensitivity Disorder’ which essentially means that my brain was always in fight or flight mode. So part of my recovery was training my brain to tell it that I wasn't in danger. That there wasn't a tiger in front of me and that I could relax.”

“Because I had been sick for such a long time, my body was always like, “we're in danger. We have to keep you alive.” But that really wasn't happening. But my brain had been trained to think that way. So, um, that was probably the hardest part of recovery, was retraining my brain to be like, "you are not in danger and this is a safe place.”

Something Plett won’t ever forget is what the doctor at the Mayo Clinic told her, after her Lyme diagnosis, “She says, you know a lot of people, probably wouldn't get better but I already know that you're going to do this. So you don't have anything to worry about it. You're going to get better. And I was like, wow, OK, well, I guess I'm going to put in the work then.”

Plett’s road to recovery began with medication to help manage the pain and anxiety. Then she was instructed to exercise, to get her muscle memory back in her body.

“So I started with just walking for 5 minutes, which was the worst 5 minutes ever when you've been on a couch for so long, but I did it. And then after three weeks, you do 10 minutes and then 15 minutes of walking and then you slowly build up to 45 minutes. And then eventually I built up to an hour so that I could do a 5K walk, which I did just two months ago.”

When asked, “What do you tell somebody who is at that point and they don't know what to do and they just hear the word Lyme disease?”

“Oh well, it's tough. It's definitely tough. And unfortunately, you might be dealing with stuff for the rest of your life, but there is a way to make it better. That's what I learned at the Mayo Clinic is that they don't promise that they can cure you, but they promise that they can make you better. And that's all I really wanted because I really couldn't live my life the way I was. So, if you're really willing to put in the work, maybe go to a different country if you have the resources, I know not every does and we were very lucky to be able to do that. But I know, I just needed to keep fighting in order to get better, then you just keep fighting and you're going to get there."

Now that Plett is in recovery she can start to have goals that include things she likes to do, like music.

“I've actually been able to have the opportunity to open my own music studio, which I don't think I ever would have even attempted to do if I hadn't gone through this, which is a kind of a good thing, bad thing. So I'm really excited to teach kids and I'm really excited to see how I can help them in their musical journeys and then maybe in the future as I get stronger, then I can start exploring my own musical opportunities again. I have always had a passion for performing and I hope through continuous work on my part that eventually I can get there again.”

Plett says her family has been her biggest support. “When I was too tired to fight for myself, Mama bear and Papa Bear would come in and help me get to appointments and fight for me when I couldn't.”

“I've been sick and now I have some of my life back, it's just that I'm so thankful for every day that I have. It's giving me such a different perspective on life now."

“It really is like...it feels like every day is a gift.” 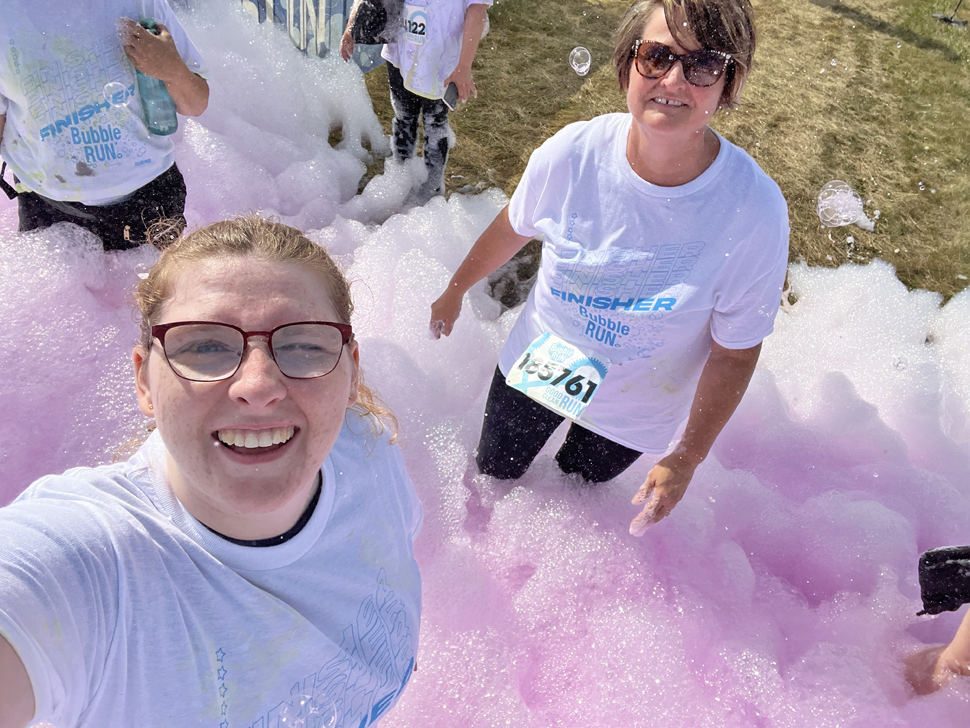 Snowy and windy Sunday in the Southeast

Delivering furniture and hope to Ukrainian refugees in Steinbach

Making history at Sarto Hall, board injects new life into the building